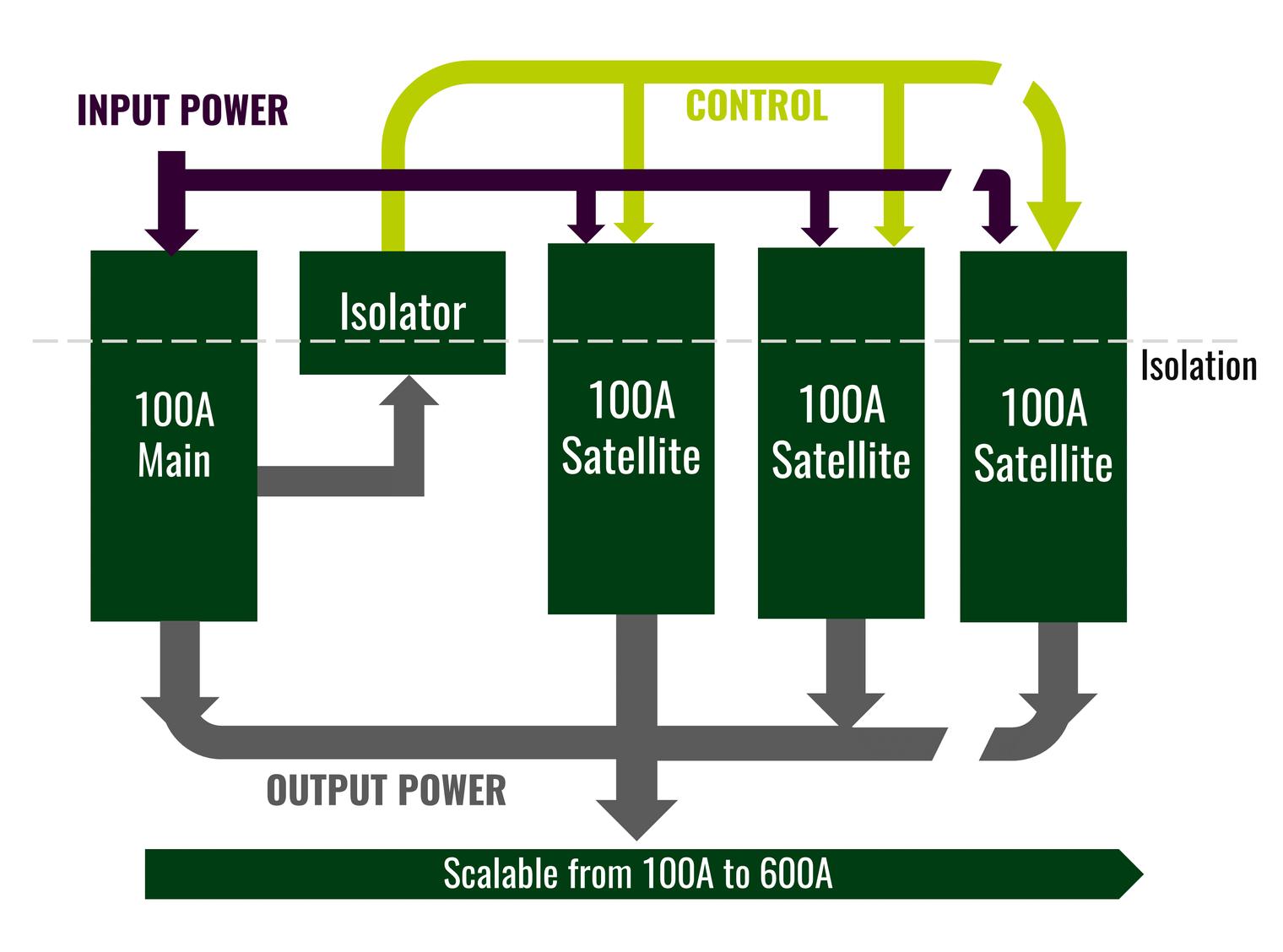 Power conversion is a challenging area for designers, especially in our cost-sensitive world. Not only are they challenged with designing ever more dense solutions, wringing more power out of a smaller space, but these solutions have to be more efficient and cost less than previous generations.

With so many OEMs basing their competitive advantage on the efficiency of their solutions, delivering these challenging and sometimes conflicting goals is directly coupled to business success. Over the years, in a bid to deliver higher efficiency and lower cost, the power electronics industry has developed and uses multiple architectures.

There are several key areas in which direct conversion delivers benefits – improved conversion efficiency, lower loss power distribution, board space savings and compliance with the Open Rack V2.0 standard. In this technical article, Flex will focus on efficiency and look at the current state-of-the-art power architectures as well as a new organisation that promises to deliver greater choice and flexibility to the OEMs that rely on efficient and freely available power solutions.

Many years ago life was far simpler for designers, with most semiconductors requiring a single 5V supply. At that time, all that was required from a power supply was a reliable and fairly clean 5V rail that could be delivered to all of the devices in the system. The most common architecture was a single central power supply unit (PSU) or, in systems requiring high reliability, possibly a redundant PSU arrangement.

In the 1990s and early 2000s things started to change, mostly driven by logic devices operating from different voltages. As multiple power rails were now needed and efficiency was an often-discussed topic, a different approach was introduced. Converters were defined by their size – full-, half-, quarter- or eighth-brick – and multiple isolated converters were used to convert the 48V DC bus to the voltages required by the semiconductors.

A decade later, (this time line is ambiguous; this actuallty happened after the turn of the century, as well.) the Intermediate Bus Architecture (IBA) was proposed and has become popular in many applications, such as data communications, data centres and telecom applications. One of the primary aims of this approach was to centralise the isolation into a single bus converter, reducing the bulk of multiple isolated converters. Some of these Intermediate Bus Converters (IBCs) were also known as ‘ratio converters’, as they could be characterised by the ratio between their input and output voltages. Many of these IBCs were at least semi-regulated to provide a sufficiently ‘stiff’ voltage for use with devices other than point-of-load (PoL) converters, such as fans.

As the name suggests, the PoL converters are positioned physically close to the load, typically a microprocessor, FPGA, ASIC, memory or other digital IC to minimise noise and reduce losses by shortening the low-voltage, high-current path, reduce decoupling capacitance, and also to improve response to load transients.

In recent years data traffic has increased significantly due to the boom in mobile devices and, in particular, increased high-bandwidth video content. These figures are expected to rise tenfold between 2017 and 2022, according to Ericsson.

At the same time, the power required by blade servers has risen and now exceeds 1kW, with levels above 3kW expected to be reached in the next few years. While the number of mobile devices has been increasing at a staggering pace, the tremendous increase in procesing power and focus on efficiency of systems will arise more as a result of data requirements from Big Data, AI, IoT-enabled devices, autonomous autombiles among other factors.

With energy prices already high and only expected to rise further, operational energy costs are also continuing to rise. Every Watt of power that is turned to heat by inefficient power conversion costs money. Worse still, the heat has to be managed – this adds size, weight and cost to systems in the form of in-system cooling, and also requires more powerful air-conditioning systems in the buildings that cost money to install and run.

As a result, even a relatively small efficiency gain in the power conversion can result in significant size and cost savings for data centre and telecom operators.

While there are many benefits to using the two-stage conversion IBA including cost and space, there is an impact on efficiency. Until recently, the other benefits of the IBA outweighed the reduced efficiency but, as we have seen, higher power levels and rising energy costs are shifting the balance of that decision.

Typically, a 48V to 12V (4:1) IBC would deliver efficiencies in the region of 96%, and a PoL converter could convert the 12V into 1V for the load at an efficiency of 90%. Combining these two values gives an overall conversion efficiency of around 86.4% for an IBA. Using legacy technologies, this would equate to around 157W of power loss for a 1kW server, and a server consuming around 3.2kW of power would have a power loss of around half a kilowatt (500W). If the 48V to 12V conversion stage of 98% efficiency were to become common, a 1KW server would still dissipate 137W, and a 3.2 KW server would dissipate 438W.

Today’s single power stage modules are capable of converting 48V to 1V in a single step (aka ‘direct conversion’), achieving efficiencies of 91% or higher. In this case, the 3.2kW server board would generate power losses of just 315W, a 37% reduction, or 185W of waste power saved. While the improvement is ‘just’ 4.6 points of efficiency, in modern data centres with many hundreds or even thousands of servers, the power savings are huge – delivering significant reductions in operating costs. 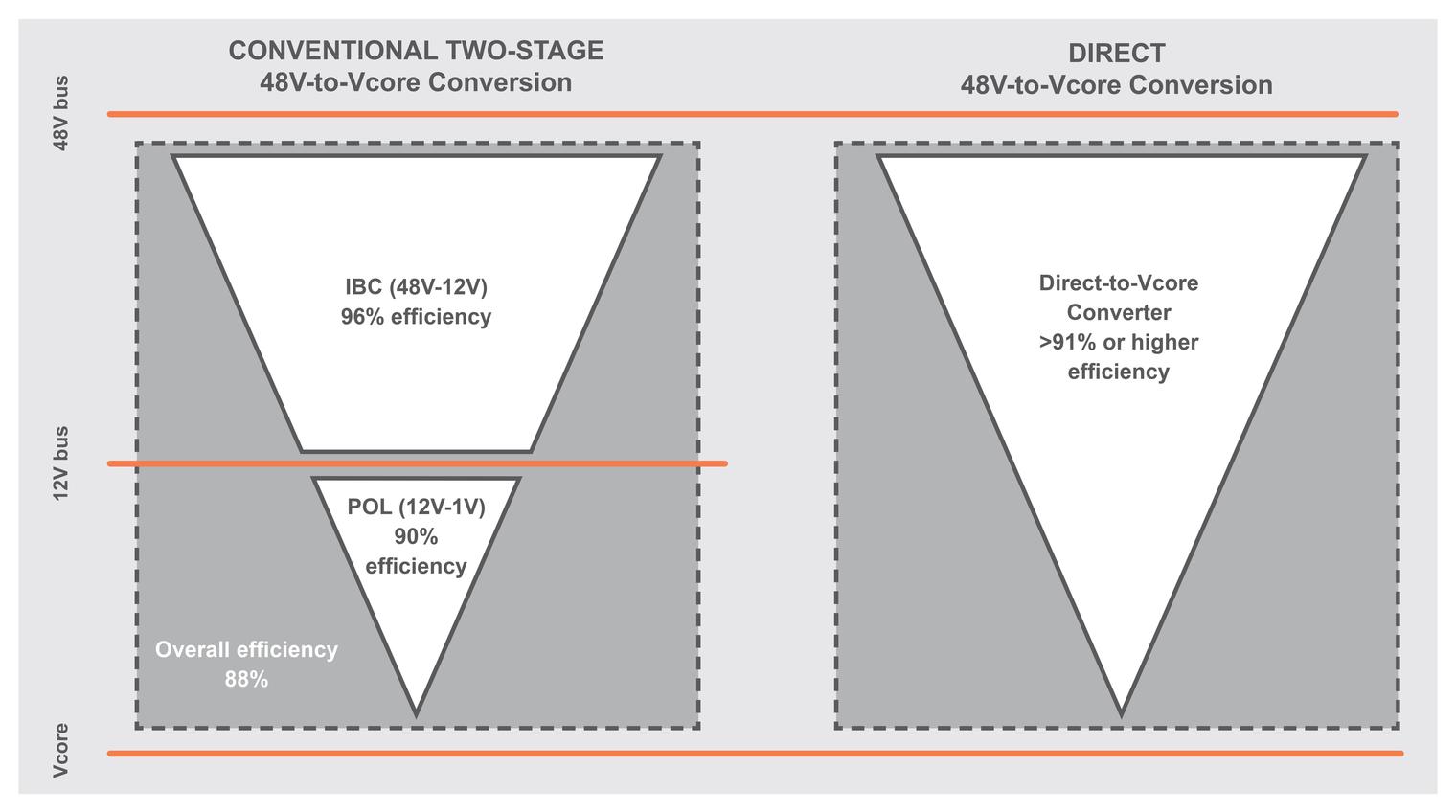 As power conversion technology has improved since the advent of the IBA, topologies that allow for compact and efficient direct conversion from the 48V bus to sub-volt logic levels are now in development. These modern devices operate at high frequencies to give excellent transient response, typically with reduced required decoupling capacitance, yet are capable of working with the very low duty cycles required to make converting 48V to around 1.0V directly a reality.

While direct conversion represents a key trend for the industry, things will not change overnight. The new devices will be offered alongside conventional two-stage conversion approaches, at least for the foreseeable future. During this time, power system designers will be able to choose the best approach – which may, in fact, be to combine the two approaches into a ‘hybrid’ architecture that offers the best of both worlds.

Such is the confidence that single-stage conversion will form a significant part of next-generation power solutions for data centres and telecom infrastructure, four of the key players in the power module industry have combined to form a new alliance dedicated solely to promoting the benefits of direct conversion.

The Power Stamp Alliance (PSA) was formed earlier this year, and Flex is a founder member of this organisation. The primary goal of the PSA is to provide a multi-sourced approach to standard direct conversion power modules. In order to achieve this goal, the PSA has developed specifications that define the footprint and interface functions for 100A direct conversion modules (known as ‘power stamps’), allowing the PSA member companies to determine the electrical performance.

There are two types of power stamp: the main stamp is essentially the ‘master’ and contains control logic, while the satellite delivers power as required. All of the stamps perform direct conversion and are isolated.

Figure 2: The PSA architecture is based on multiple direct conversion modules

At a system level the PSA architecture is based on 100A power stamps, and systems can be configured with up to six stamps (one main and up to five satellites), giving them a 600A capability. If the current demand decreases during operation, in-built controls will allow satellite stamps to be automatically disabled, thereby ensuring optimum levels of efficiency across a wide current range from 100A to 600A.

Due to the ever-increasing amount of data to be processed, transmitted and stored alongside rising energy costs, power conversion efficiency is hitting the headlines more than ever before. Through on-going development and technology improvements, direct conversion from the bus voltage to the load voltage is now a viable option, and many in the industry see this as the future in demanding applications due to a number of improvements over techniques such as IBA. In fact, direct conversion increases efficiency in the conversion process as well as reducing system-wide losses significantly by distributing 48V instead of 12V. As a direct result of there being less waste heat, thermal management needs are reduced, saving space and weight – and furhter space savings are achieved by dispensing with the need for an IBC.

While adoption of new architectures is often slow due to the lack of alternative sources, direct conversion promises to have a much faster adoption rate, which ensures that interoperable products from several independent vendors will be available in the early stages, thereby allowing customers to adopt the new approach with minimal commercial risk.